skip to main | skip to sidebar

The mini-marathon last night got me thinking about this. And I'm not talking about the complex human-cylon relationship - I'm talking about in real American terms. The original series had a much better integrated cast and black characters that were greater parts of the show. Does adding central hispanic and asian characters really make up for the lack of black actors on the show?

Out of the entire human population in the civilian and military fleets, there have only been two black characters. One completely minor, and the other the subject of an entire episode (which exposed Admiral Adama's abandonment of him in Cylon territory previously.

How do we even attempt to measure racism in a science fiction show? Is it just that there weren't that many blacks that escaped Caprica, the colonies and New Caprica? Earth presumably represents the Atlantis-like 13th Colony, and those settlers came from the same places as the other members of the fleet. We know empirically that earth has a diverse racial/ethnic mix (which are meaningless terms outside of politics - biology and genetics have demonstrated that there is more variation within racial groups, than there is between them).

At least the show makes up for the extreme lack of diversity by beginning to address class issues that exist on the fleet and its original (now destroyed) civilzation.
Posted by Uneven Steven at 1:41 PM 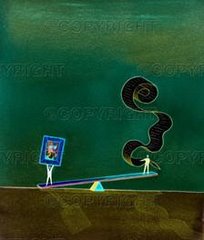 We are at terror threat level: